Will UNESCO Save the Tank Man of China? 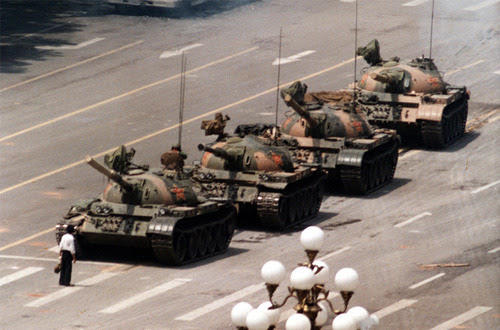 UNESCO’s Memory of the World Program is “an international initiative launched to safeguard the documentary heritage of humanity against collective amnesia, neglect, the ravages of time and climatic conditions, and willful and deliberate destruction.”  But what events deserve a place in this ambitious and influential project?
Today the Memory of the World Program faces a crucial test of its intellectual and moral integrity:  Will it include photographs of the “Tank Man,” that is, images of the young Chinese man who, in 1989, heroically stood his ground before a line of army tanks on their way to Tiananmen Square?
The photographs are already among the most well-known in the world. The Tank Man’s image is seared into the world’s collective consciousness as an icon of courage, sacrifice, and peaceful protest, of “speaking truth to power.” In 2016, Time Magazine named the Tank Man image as one of the “100 Most Influential Photographs of All Time,” describing the photo as “a symbol of resistance to unjust regimes everywhere.”  The photos marks not only the courage of the protester, but of the journalists who documented the events as well.
But as famous as they are, the Tank Man images are in danger of being suppressed and forgotten.  It has been 28 years since at least hundreds, but by most accounts thousands of innocent lives were lost when the Chinese government violently attacked unarmed students and other citizens in Tiananmen Square and elsewhere on June 4, 1989.   China’s dramatically rising power and influence on the global stage have been accompanied by the government’s persistent efforts to destroy, censor, conceal and suppress information about the Tiananmen massacre. In fact, the permanent record of the Tank Man image is now in danger of being lost due to the sale of Corbis, a photography archive, to the Chinese state.
In this situation, it is our moral and historical obligation to ensure that future generations can and will know and understand what happened there, and that they have the opportunity to feel in their souls the moral power of young Chinese who risked and lost their lives for human rights and democracy.
In May 2016, Initiatives for China, an NGO whose mission is a peaceful transition to democracy in China, the Newseum, a museum devoted to defending basic freedoms, and renowned American photographer Charlie Cole, nominated the images of the Tank Man to be inscribed into the Memory of the World Register as part of the world’s documentary heritage.
As a permanent part of these archives, the images will be preserved not only as sources of information and inspiration for the people of China, but for people everywhere drawn by the same ideals as the Tiananmen student protesters.
The UNESCO decision-making process has reached a critical stage.  The International Advisory Committee of the Memory of the World program found that the images met the criteria for the Register and passed our application for the significance test. It will soon further review the candidates and make a final recommendation to Irina Bokova, UNESCO’s Director General, who will make the final decision.
In 1989, the Tank Man defied China.  Today, will China use its massive political and economic leverage to hide the Tank Man from the world, and thus try to hide from its own history?  Indeed, nothing could be more healthy for Chinese society than for the Chinese government to support inclusion of the Tank Man images in UNESCO’s archive.  It would be a dramatic demonstration that China has nothing to fear from her history, or her own people.  It would confirm President Xi’s declaration at Davos, in which he said that China seeks to defend the liberal democratic world order.
With illiberalism on the rise in many places in the world, many societies need the reaffirmation of universal values offered by the Tank Man.  With UNESCO’s support, the Tank Man’s spirit will endure.
Yang Jianli is President of Initiatives for China.  Aaron Rhodes is President of the Forum for Religious Freedom-Europe.
Url: http://www.huffingtonpost.com/entry/59316154e4b0649fff21180f
ShareTweet