The Only Liquor That Can Subvert a Regime

–Commemorating the 28th Anniversary of the Tiananmen Massacre 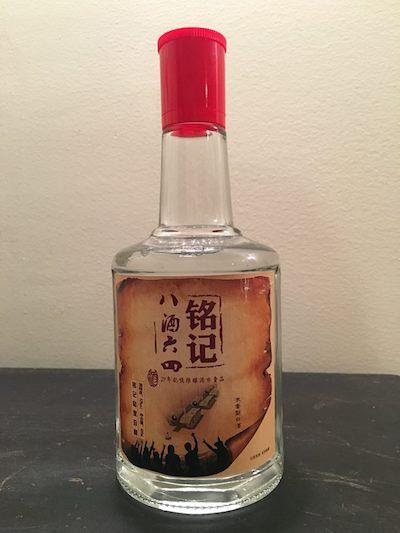 I put it in an eye-catching place instead of the wine cabinet. Anyway, the cabinet is not big enough to place this bottle of liquor. This is the world’s most expensive liquor. which used twenty-eight years to brew. Across young to older ages, its raw materials are the blood of the warriors, tears of their beloved and the pain of countless people.
This bottle of liquor traveled across Asia and Europe to my hands. Its journey started in southwest China from the hands of a brother whom I have never met. It is not for anyone to enjoy at the dinner table. It still has a long way to go, and I am designing its itinerary for more people in the world to see the wine.
Everyone should know the story behind this bottle of wine.
Let us remember the names of the four arrested “brewers”: Chen Bing, Fu Hailu, Luo Fuyu and Zhang Junyong. Let us also remember the name of a Chengdu-based poet Ma Qing, who was detained as a criminal just because she advertised for the liquor in her micro-blog. Perhaps this is the only wine in the world that can “incite subversion” of a regime.
Yes, it is poison in the eyes of Chinese dictators. Its toxicity is strong enough to expose their lies, and it’s strong enough to tear down the curtain of the real world that the Chinese government doesn’t want people to see. For twenty eight years, grouping a few simple digits 8964 has been a taboo. The executioners of the June 4 massacre (The Tiananmen Massacre that took place on June 4, 1989) and their successors make every effort to wipe off the memories of the tragedy in Beijing’s streets, where its army slaughtered its people.
But we will never forget or fear or give up like the cold-blooded and the depraved. This is not out of stubborn. We all know that 8964 is the password to interpret the Chinese politics and society. China will never become a free, democratic and law-abiding country without the password decoded. In order to decrypt these digits, people with insights have tried a variety of ways to fix people’s memory. In 2016, shortly before the twenty-seventh anniversary of the June 4th massacre, Chen Bing, Fu Hailu, Luo Fuyu and Zhang Junyong launched the 8964 wine- “27 years of memory and it is not for sale.” Presumably they must have thought very hard to use the homonym of “nine” and “liquor” in Chinese to create a brand “8 liquor 64”, which not only describes the commodity attributes, but also to makes it easier to go unnoticed in the market. The two Chinese characters Ming Ji (engraving in memory, in Chinese) are printed at each side of the number which look like a trademark logo.
However, the drinker’s heart is not in the cup. It is a reminder for people not to forget 8964.
For people who know how to taste this particular wine, it was intended to send out certain messages. For the general consumers who saw the secret by chance, it was a reminder of the bloody crackdown 27 years before. Perhaps this does not sound like a good idea, because it was unlikely that the wine would sell well, except the initial circulation on a small scale. As happened, it was stopped by the Public Security Bureau and ended up in the detention of the “brewers”. However, this is also a great idea. In the Chinese customs, great sadness or happiness is often accompanied by wine, and Sichuan Province has always been rich in brewing famous liquors. Now it had brewed the liquor that commemorates the massacre, the persecuted, and those who love freedom. Who will doubt that we will be the last winner? On that day, we will drink the wine to celebrate.
I don’t have the luck to meet these four “brewers” but we are brothers who deeply care for each other. We have experienced setbacks, imprisonment, exile, helplessness and loneliness, but nothing can ruin our friendship and common ideals. In the twenty eight years, we have not been beaten to the ground. We don’t need another 28 years to test our will – there will not be another 28 years!
Thank you for your liquor, my brothers! we will tell people around the world that the Tiananmen massacre was not just history, but is also today’s reality in China. I want to tell more people the story of this bottle of wine. I want to tell people that it is so precious, not only because of the integration of blood, tears, pain, boldness, conscience, dreams, brotherhood, but also because finally victory will be added to its ingredients.
ShareTweet