After giving President Xi Jinping nearly two months to help resolve her case,  Ms. Ma Yongtian, one of the two “sparrows” described in the report below, will start another round of protest in front of the Chinese Embassy in Washington, DC.  Initiatives for China calls for international spotlights on her property rights defending story and that of many many other victims of China’s policies of forced eviction and land grabbing.

Contacts
For Chinese  Ma Yongtian (626)283-2175
For English   Adela Lan     (202)780-5998
Two “Sparrows” Blocked Xi Jinping’s Motorcade
In Washington, D.C. on September 25th, Sparrow Initiative key members: Ms. MA Yongtian and Ms. LI Huanjun successfully broke through police line, and blocked the motorcade of Chinese president, Xi Jinping, to petition the illegal land grabbing crimes of local Chinese officials.
Sparrow Initiative is a campaign lunched by Initiatives for China to help the petitioners and victims of force eviction and land grabbing in China. Sparrow Initiative groups have formed in virtually every province of China to counter the widespread practice of local governments collaborating with developers to grab land for special projects or private development. Over many years of struggle, Sparrow Initiatives has successfully helped several petitioners to receive compensation from the Chinese government.
Ms. MA Yongtian has petitioned for justice of losing her land to local officials for more than a decade. She was a key member of Sparrow Initiative in China before her escape in 2013. More Details on Ms Ma can be found here: http://www.initiativesforchina.org/?p=1462
Ms. Li Huanjun, an elementary school teacher from Beijing, was putting up a fight defending her home in China. The local government arrested her before demolishing her house. She left China in 2014 to join the Sparrow Initiative campaign. Ms. Li brought out video footage of the force demolition of her village before her arrest. Initiatives for China will publish the videos soon.
Here is a television news report by a Canadian agency:
https://docs.google.com/file/d/0BzrVn5pACX0CN3VDQm1Ma3EtS0k/edit
More of her store can be found here: http://www.initiativesforchina.org/?p=1480
Motorcade Incident
On September 25th, after Xi Jinping visited the White House, he was heading to the State Department to have lunch with  Vice President Joseh Biden and Secretary og State John Kerry. Ms. MaYongtian and Ms. Li Huanjun were waiting behind police line near the State Department for the arrival of Xi Jinping’s motorcade. Among them were around 20 petitioners and a welcome crowd.
Around 1 p.m., as the motorcade was entering the State Department, Ms. Ma Yongtian and Ms. Li Huanjun rushed through police lines and ran towards the motorcade. Ms. Li threw herself in front of the lead limousine. She was half under the vehicle before police pulled her to the sidewalk. Ms. Ma was also pulled back by police. 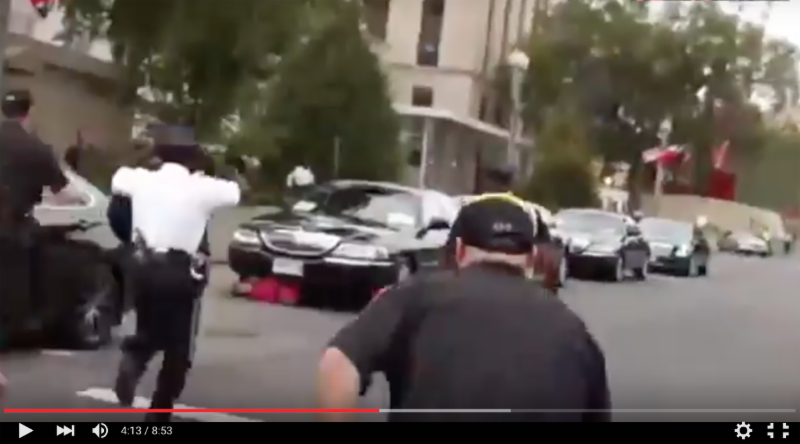 First Motorcade Video: https://youtu.be/L_XT5pi631I (Ms. Li ran into the motorcade at 4:11)
A few minutes later, as  the motorcade’s second group of  cars approached,  Ms. Ma  again rushed towards it. Ms. Li was not able to break through this time. Ms. Ma threw herself under the vehicle, which is believed to have been  Xi Jinping’s vehicle.. A police officer with a K-9 police dog immediately dragged her out from under it.i. 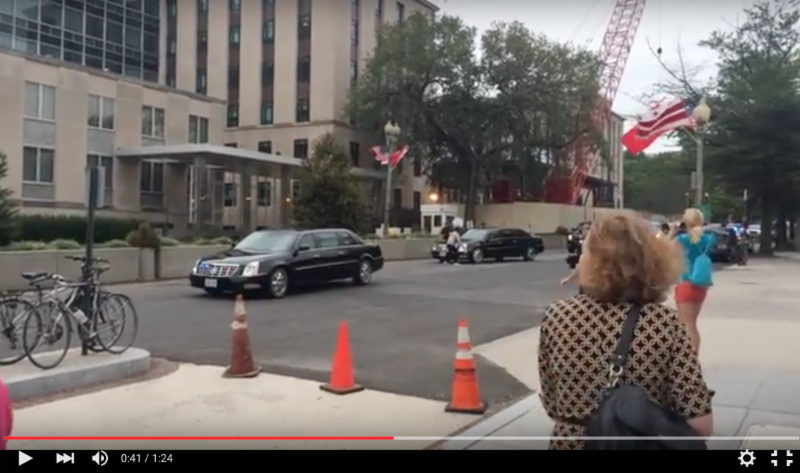 Second Motorcade Video: https://youtu.be/FACzahmT8K4 (Ms. Ma ran into the motorcade at 0:37.)
About 30 minutes after Xi Jinping arrived at the State Department, two Chinese officials, believed to be Xi Jinping’s secretary or aide, came out of the State Department and talked to Ms. Ma and Ms Li. These two officials were very friendly, and they took petition letters from Ms. Ma Yongtian and Ms. Li Huanjun.
We note that Ms. Ma’s action were in keeping with a centuries old Chinese tradition of citizens unable to get redress forunlawful acts by loca,l officials would travel to Beijing and try to block the emperor’s carriage in order to present him directly with their petition for relief. So Ms. First, Ma’s actions achieved a partial victory in two ways. Her bravery forced President Xi to acknowledge her grievance and accept her petition. Second, these video’s of her bravery went viral back in China. Along with other videos of large crowds of angry Chinese,Tibetans and others groups surrounding the White House and demonstrating against Xi’s repression of liberty, they made clear that he was met with protests by many aggrieved citizens of China, despite his extensive efforts to pretend otherwise.