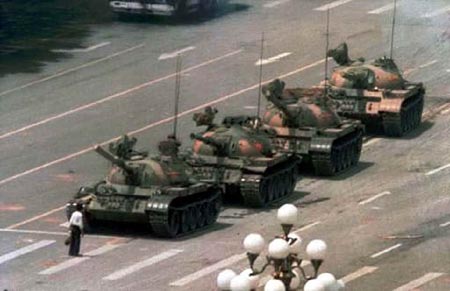 The iconic image on Beijing’s Chang’an Street bravely confronting PLA tanks is one of the most important photographs of the twentieth century.  It represents ordinary citizens confronting the State violence, and it is not forgotten by history.  Over more than two decades, the whole world has been asking: Where is the tank man?  As of today, the background of the tank man “Wang Weilin,” and his subsequent fate are still unknown to the world.  At the same time, we should not forget that, despite  the CCP’s massacre order, the soldier in the tank chose not to shoot or run over his compatriot. The most logical explanation is that his conscience made him disobey the order.  This soldier is equally a hero.  As Time magazine pointed out: “[T]he heroes of the tank picture are two: the unknown figure who risked his life by standing in front of the juggernaut and the driver who rose to the moral challenge by refusing to mow down his compatriot. “
Nobody knows the fate of the two heroes, but it is our responsibility to know and to find them. For together, they symbolize that timeless truth that moral courage will triumph over cowardly cruelty.
We hereby launch the initiative of collecting signatures across the world to petition Xi Jinping for the identities, background,and the  whereabouts of the two tank men. Please sign your signature and encourage others to sign.  There is no deadline for this project, and we will continue to collect signatures until the truth is obtained.

Ways to sign
(1). Go to http://tinyurl.com/finding2tankmen
(2). Enter First Name, Last Name, Email, Country, City or Zip code.
(3). If a street address is asked, and privacy is a concern, please enter N/A.
(4). Click sign
Note: When more than one people want to use one same device to sign, the previous signer must Log Out before the following one to enter.
ShareTweet