After three years of work, TIME has released its 100 most influential images of all time, a collection curated by international historians, photo editors, photographers, and reporters from around the world. 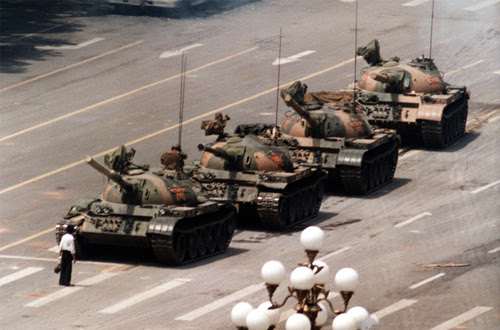 Initiatives for China (a.k.a. Citizen Power for China) is pleased that The Tank Man image from the 1989 Tiananmen Square protests was selected as one of the 100. We applaud TIME’s effort and celebrate the selection of the Tank Man image, which once again confirms the historic value and significance of this iconic and powerful photograph.
TIME’s selection criteria was based on whether the images’ influence can be quantified by examining how specific photographs drive and change the course of history. Indeed the Tank Man image has become not only a symbol of the 1989 Beijing pro-democracy protest, but also a symbol of nonviolent resistance against oppression worldwide, defining human courage, spirit, and defiance.
The Tank Man photo has inspired so many people around the world, but his identity remains a mystery. IFC launched its “Finding the Tank Man” campaign to unearth the truth about the fate of this brave young man who 27 years ago single-handedly stopped a column of more than 20 PLA tanks rolling down on Chang’an Avenue in Beijing right after a bloody massacre of students and other peaceful protesters, resulting in a death toll estimated at anywhere between hundreds and thousands.
Along with the “Finding the Tank Man” campaign, IFC also nominated the Tank Man image and concurrent video footage as documentary heritage to the UNESCO Memory of the World to fight against China’s State-directed information censorship of this footage, and the resulting collective amnesia of the event within China and around the world. The nomination, which was submitted jointly with the Newseum and two photographers who took the Tank Man image in 1989, is currently under consideration for inscription into the Memory of the World register. The selection of the Tank Man as one of TIME’s 100 most influential images of all time will help to ensure that this iconic image’s historic value is recognized, and its memory safeguarded.