May 31, 2017 | Hong Kong, Prisoners of Conscience, Tiananmen Anniversaries, Tiananmen Massacre to Memory of the World Register

By Didi Kirsten Tatlow
May 30, 2017
BEIJING – It’s a big journey for a little bottle, even one so potent in alcohol and symbolism.
The liquor bottle – whose label commemorates the 1989 crackdown on democracy demonstrators in Tiananmen Square in Beijing – made a monthslong trip around the world and arrived in Hong Kong days before the 28th anniversary of the killings on Sunday and one year after it was produced in Chengdu, in the southwestern Chinese province of Sichuan.
It was carried by hand, reportedly by a sympathetic Chinese official, from Chengdu to the Middle East and then by someone else to Paris, where it was mailed to Washington, arriving about four weeks ago, said Yang Jianli, a Chinese-born rights activist based in Washington who aided its passage around the world.
Finally, coming nearly full circle, the 450-milliliter bottle of baijiu, a fiery Chinese clear liquor, was carried to Hong Kong, a semiautonomous city that is part of China, by Andrew To, a local democracy advocate. Mr. To confirmed his part in the bottle’s travels in an interview. In Hong Kong, it is set to appear at a candlelight vigil on Sunday to memorialize the crackdown in Tiananmen Square, providing a new “focal point” for the event, Mr. Yang said.
Mr. Yang declined to identify the official who smuggled it out and asked that the Middle Eastern country that was the liquor’s first destination not be identified to protect the official.
As all of that was going on, the four men charged with producing and selling the commemorative liquor sit in detention in Chengdu, facing possibly long prison sentences. In March, Chinese prosecutors charged Chen Bing, Fu Hailu, Luo Fuyu and Zhang Junyong with “inciting subversion of state power.” They were “dissatisfied with our country’s socialist system,” the court said, and “plotted together, discussed, manufactured and printed” the baijiu’s special labels.
The liquor’s name, “Eight Liquor Six Four,” is a homophone for 89/6/4, the date of the massacre on June 4, 1989. The label features a modified drawing of the famous standoff between an unarmed man and a row of tanks near Tiananmen Square, and it boasts that the liquor was aged for 27 years. (Last year was the 27th anniversary of the crackdown.) The men advertised their product online and had sold perhaps several dozen bottles – charging 89.64 renminbi, about $13, for two – when the police detained them in May 2016.
The Chinese government has never said how many people died around Tiananmen Square when troops moved in on the night of June 3, 1989. It officially labels the event “turmoil” and forbids public discussion or commemoration of the victims, arguing that the high-speed economic growth that followed the protests proves that taking firm action to restore Communist Party-led political and military order was the correct course.
The charges against the four men are absurd to the parents of Xiao Jie and Wu Guofeng, who were killed in the crackdown as 20-year-old students at Renmin University of China in Beijing. The parents, who live in Sichuan, want to testify on behalf of the defendants, who they said are of good character.
“If remembering June 4 is a crime, then please, the Chengdu Public Security Bureau should arrest us,” said Mr. Wu’s father, Wu Dingfu, in a deposition for the court, copies of which have been circulating online. “We remember our son each year on June 4. We must be the real plotters.”
“Like my son Xiao Jie, I just want this country to get better,” said Mr. Xiao’s father, Xiao Zongyou. The four defendants are idealistic, he said, “just like my son.”
No date has been set yet for the trials at the Chengdu Intermediate People’s Court, Wan Miaoyan, a lawyer for Mr. Chen, said in an interview. Her client and the other defendants have pleaded not guilty, she said.
“The reason we’ve pleaded not guilty is because, under Chinese law, their mere commemorative action does not constitute a crime,” Ms. Wan said, calling on the court to judge the case leniently in the interest of social harmony.
“Blood was shed during the student movement, no matter whose. A lot of people’s destinies were affected,” she said.
“It’s doesn’t make sense that after 28 years such a moderate and innocent commemoration should be seen through the prism of politics, as if it threatened political power,” she said. “The incident should be neither taboo nor a totem.”
Commemorations have taken place every year with small, private events in China and public events outside the Chinese mainland. 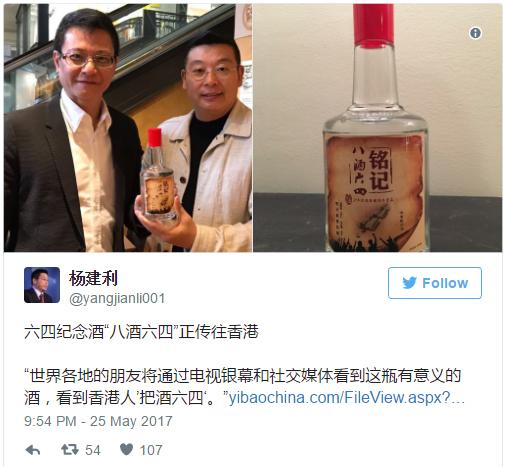 Nowhere is the anniversary remembered on a greater scale than in Hong Kong, the former British colony that returned to Chinese rule in 1997 but has retained a more liberal political and economic system. Tens of thousands of people, including some visitors from the Chinese mainland, gather each year for a candlelight vigil in a public park.
The presence of the modest bottle so freighted with meaning may irritate the Chinese government, as a symbol of persistent challenges to the Communist Party’s interpretation of history. After the vigil, Mr. To said, it may be placed in a Hong Kong museum dedicated to the 1989 protest movement.
Mr. Yang said the bottle’s label will help combat the amnesia that has enveloped the killings on the Chinese mainland.
“These people were trying to reactivate the collective memory of our own past,” he said. “China must some day come to terms with its past, and this incident must have a solution.”
“I think the resolution of Tiananmen, one way or another, will provide the key to opening up the political space of the future,” he said, adding that the four digits – 89/6/4 – had become a “code” for political change.
Elsewhere, too, the bottle meme has been picked up. In a Twitter post, Amnesty International called on people to #toasttoremember the anniversary with a Chinese baijiu bottle featuring photographs of the four defendants: 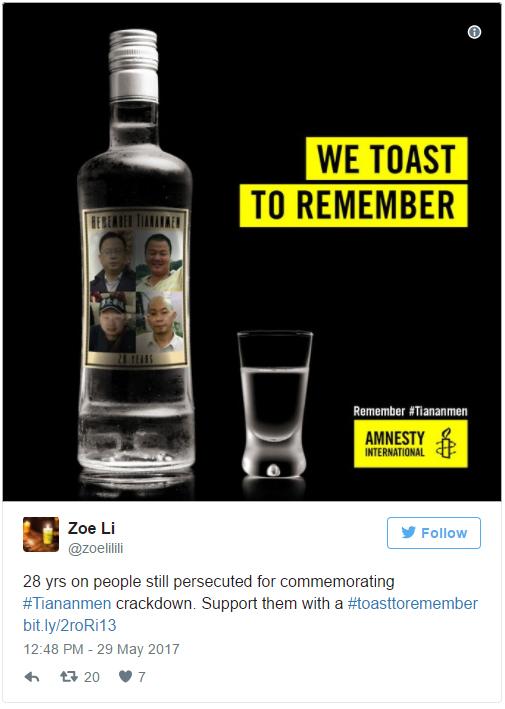 Or with Western-style wine: